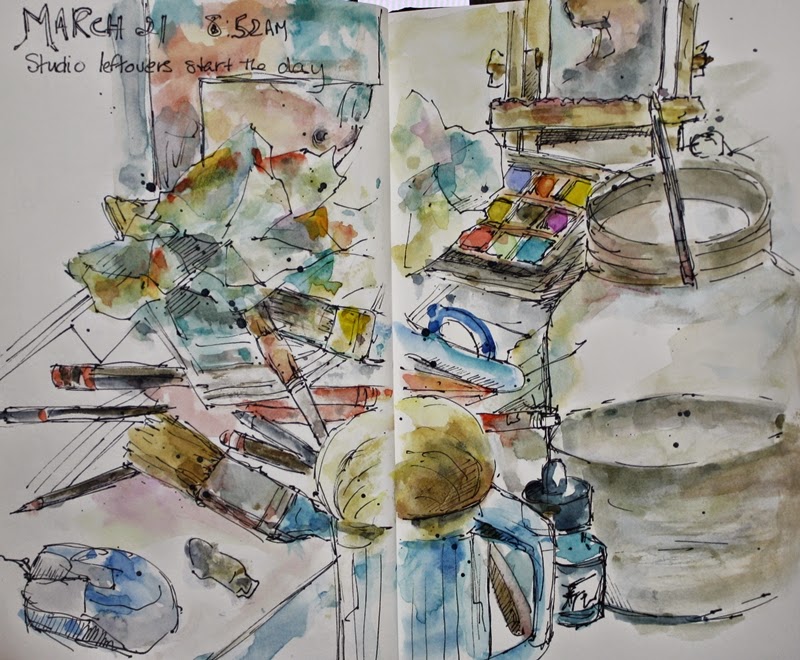 There is a theory which states that disorder promotes creativity.


Recently, a study conducted by the University of Minnesota found that people with a messy desk were more prone to creativity and risk taking, while people at cleaner desks tended to follow strict rules and were less likely to try new things or take risks. Dr. Vohs and her co-authors conclude in the study, "Disorderly environments seem to inspire breaking free of tradition, which can produce fresh insights."

There are many proponents of disorder leading to creativity, like A.A. Milne, the creator of Winnie the Pooh: “One of the advantages of being disorderly is that one is constantly making exciting discoveries.”

Or Albert Einstein:  “If a cluttered desk is the sign of a cluttered mind,” he said, “then what are we to think of an empty desk?”

There is the opposite of course in being too organized.  The person who spends all their time reading books about art technique, buying supplies and organizing papers or paints in alphabetical order can be at risk of becoming frozen by process and never actually creating art.  Of course, I do like order, but when it comes to my studio, disorder often reigns.  There  are paints all over the place, pencils, pens, palette knife, watercolour sets, containers of water, ink...you name it.  But I know just where everything is!  And I know its close to hand when an idea strikes.  Finding the perfect balance between mess and organization is a fine line to not let one overtake the other.

Its a bit like doing ironing for me.  I don't mind ironing, but the thought of getting out the iron, setting up the board, hauling the basket of clothes to the utility room, ironing, folding, putting away, etc. makes me procrastinate.   Its similar when all my painting or drawing tools are put away neatly.   I may want to paint something, but the thought of finding the colours, setting up the palette, priming the canvas, etc. etc. can sometimes make me put it off.

I think I could happily create in a four foot space with everything at hand.  I believe that is what keeps my studio in disorder - the ability to just "do" at a moment's notice without having to think much about it.  So is that lazy or creative?  If other creatives before me and within my peer groups accept that and acknowledge that they do the same, I'm happy with it.  Unfortunately, society loves to label those who do not conform to certain standards. Two-thirds of people feel guilty about their messiness.  Half judge others who they see as disorganized or messy. Which is why not many people ever get to see inside my working studio.

The sketch at the top of this post shows what was in front of me on the table that houses my computer in my studio on  March 21st.  Believe me, you don't want to see what's behind me.  The contents haven't changed much in a day, aside from moving some tools around for use.

Okay, confession time.  Are you organized or messy?  I promise I won't judge.

Source : illustratedlife[dot]blogspot[dot]com
post from sitemap
In the Ocean Edge Gallery
Inspiration From the Garden