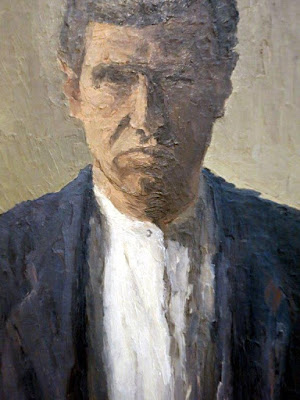 Detail of Autoritratto (Self Portrait), 1930, oil on canvas
This is the last of the very few self portraits Morandi painted

There are several ways I could begin this report. The first would be to tell you that when you walk off the elevator on the fourth floor of the Center for Italian Modern Art (CIMA) in SoHo you encounter a 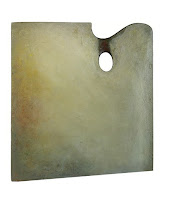 many-times-larger-than-life photograph of Morandi’s  rectangular palette, which, though scraped clean, retains a deep ochre hue—except for the place by the thumb hole where the wood remains clean.

Another would be to start with a portrait of the painter as a young man, somber of mien and hue. This modest easel-size painting is set in the center of a wall that faces you as you enter the main gallery, not so much to greet you as seemingly to square off with you. He's not smiling.

Panoramic view of the main gallery at CIMA, with the Morandi self portrait just to the left of the center poles

Still another would begin with a panorama of the main gallery, dramatic in the way its space and light set off the paintings. And finally, it could begin with an almost-life-size black and white photograph of Morandi's studio, located in a corner of his bedroom in his Bologna home.

But for the narrative, we’re going to follow the lead of the CIMA fellow who took my group around: starting in the kitchen of the loft and then working our way around the galleries. 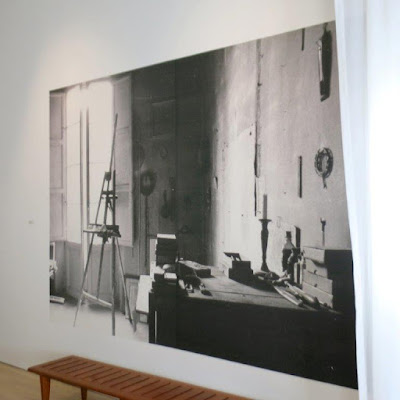 Inset above left: the Morandi palette;  above: view of the artist's studio on Via Fondazza, photographed by Antonio Masotti in 1982

I’ve wrestled with how much to show and tell you. While the Institute encourages visitors to photograph the works and blog or tweet about them, I don’t want to ruin the experience for those who will see this exhibition. At the same time, for those of you who will not see it in person, I want to share as much as I can with you. So, spoiler alert: If you plan to see the exhibition, you may want to read this after you’ve visited. (And then I’d love to know your comments.)


In the Kitchen: “A Vocabulary of Objects”
There’s a reason we're starting in the loft’s fabulous modernist kitchen. The tour is set up in the same way visitors to the Milan apartment of collector Gianni Mattioli experienced the work of Morandi, beginning with an espresso before being led through the apartment. Mattioli’s daughter, Laura, founder of CIMA in New York City, has maintained the tradition here.

Looking around the kitchen you see a beautiful series of photographs of the glass and tin objects Morandi painted. Joel Meyerowitz photographed them last summer, the group was told.  What I knew about these objects from my conversations with the dealer Stephen Haller, which were confirmed here by our tour leader, Matilde Giudelli-Giudi, is that Morandi altered the appearance of the objects by covering them with matte paint or filling them with paint, or wrapping household boxes with paper to transform them from quotidian objects into something more quirkily his own. 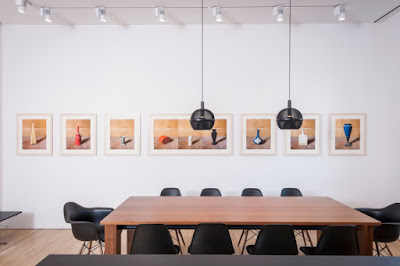 This photo, by Walter Smalling Jr. from CIMA's website, gives you a sense of the enormous kitchen in which Joel Meyerowitz's photographs are placed 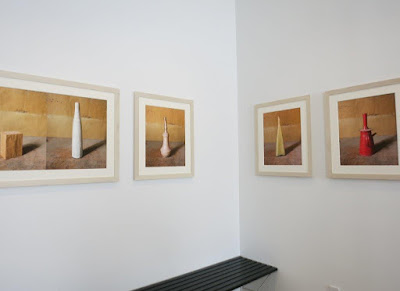 Above and below: A selection of Joel Meyerowitz photographs showing Morandi's collection of the objects he placed in his still lifes 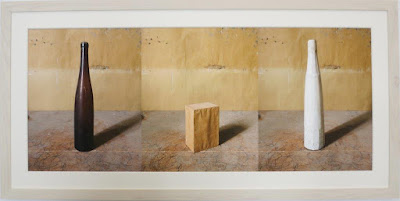 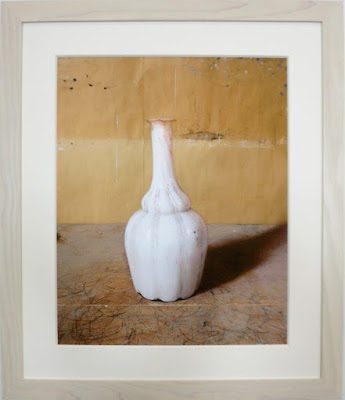 Above: An object that appears frequently in Morandi's painting, like the still life, below, Natura Morta, from 1955 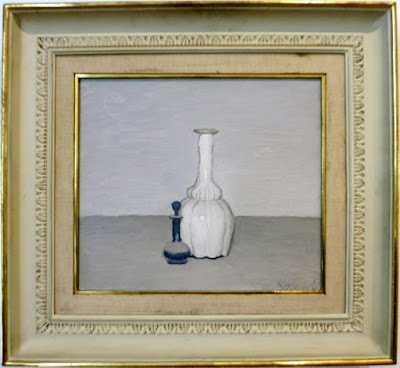 What I didn’t know is that Morandi set up his still lifes at three different levels: on the table, and on shelves at two different heights, so that even when he  painted the same motif—he revisited similar compositions many times—he may have altered them via perspective, as well as by light source, or by adding or subtracting the number of objects in the composition. I mean, I'd noticed the difference in perspective, but I didn't know until the visit that Morandi had a system for it.

Here’s another thing I didn’t know until I saw the photographs: The table on which the objects rest contains numerous pencil marks. It became quickly apparent that these marking indicate the placement of certain objects in particular still lifes. 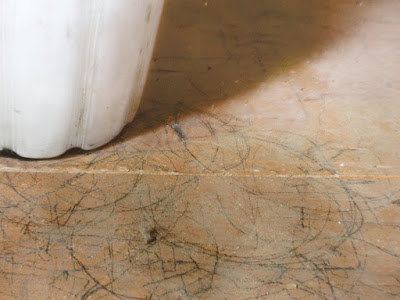 On Morandi's table, the marks he made to indicate placement of objects.  Also, you can see how the object at left has been painted matte white


Giudelli-Giudi referred several times to Morandi’s “vocabulary of objects,” noting that the dust resting lightly on some of them was integral to the artist’s vision. “A merging of object and ground” is how she described the dusty vessels. She also described the artist as a "peculiar realist," which provided the title of this post.


In the Main Gallery: Paintings and Prints from the 1930s
For the most part, the many paintings and several prints in this room are from the Thirties, a time when Morandi’s palette was largely ochre toned and his brush strokes thick, almost impasto.


The facts of Morandi's life are simple enough. He was born in Bologna in 1890, lived in a large apartment with his three unmarried sisters, taught etching at the Accademia di Belle Arti (Academy of Fine Arts) in the Thirties. According to Giudelli-Giudi that Morandi traveled with some regularity to Florence and Venice to view art. She describes 1930 as an “eventful year” for Morandi, because it was when he abandoned portraiture and figuration in favor of the still lifes and occasional landscapes he would produce.  Additional comments about the artist and his work are included in the captions.

Panorama of the left side of the main gallery. On the white wall: Paintings from the 1930, of which Natura Morta (Still Life), 1931 is shown fourth from the right, and directly below in full view. Near the windows are three etchings, one of which is shown below. (In the foreground is a sculpture in wax by Wolfgang Laib) 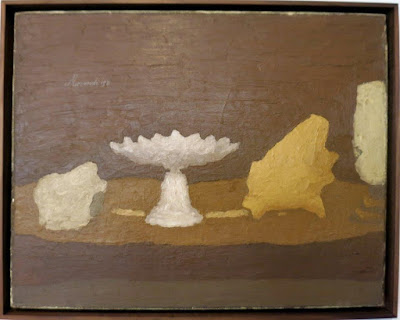 Above and below selections from the panoramic shot. I much prefer the painter's slightly wobbly lines--each paintings feels like it's breathing--to the printmaker's perfectly crosshatched etchings 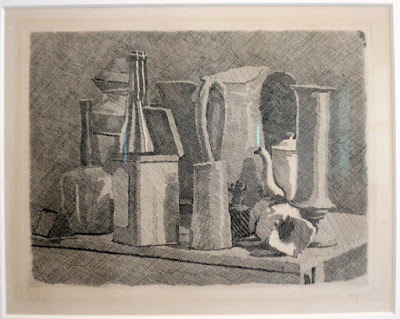 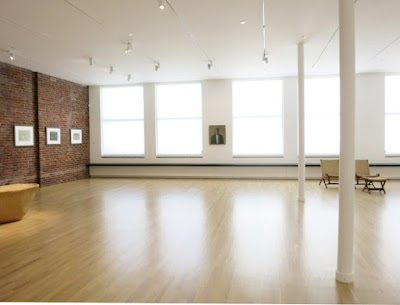 Continuing around the main room we come to Morandi's self portrait 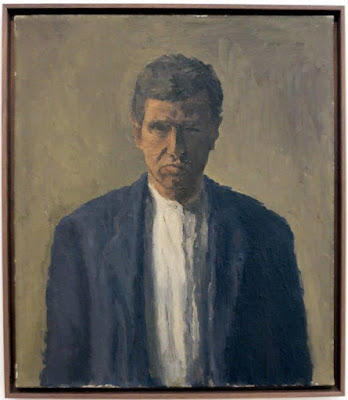 Autoritratto (Self Portrait), 1930
I love how  Giudelli-Giudi described it: "Morandi looked at himself so long he's almost disappearing." 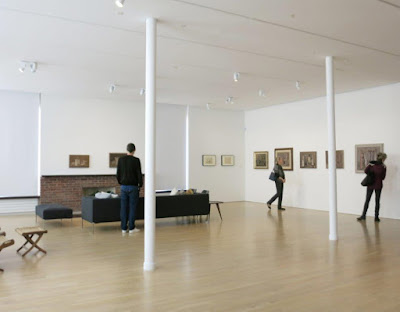 We turn to the right side of the main room and its centerpiece, the fireplace, above which are two related works 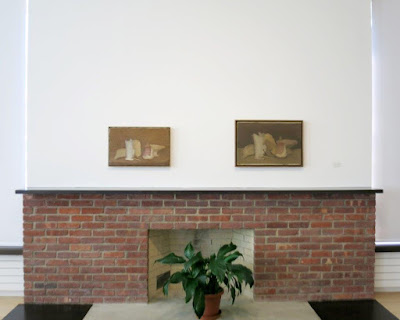 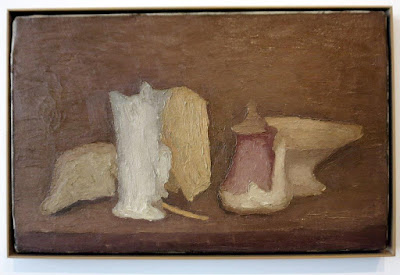 These two still lifes are identified as being from 1931 and 1929 respectively. I would have thought differently, that the brushier, more textured one was earlier, but the labels don't seem to indicate that 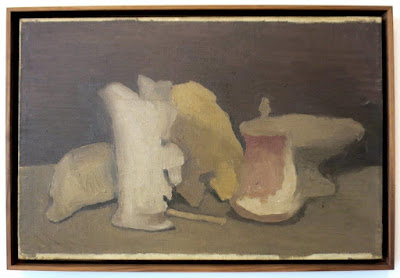 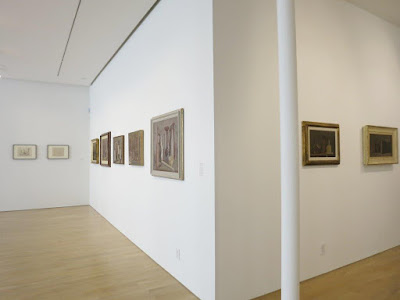 View of the wall perpendicular to the fireplace

Below: One of the paintings on that wall, Natura Morta, 1937.
The graphic quality of this painting is one of the few I've seen that bridges Morandi's paintings and prints. (But that gilt frame seems so un-Morandi-like, no?) 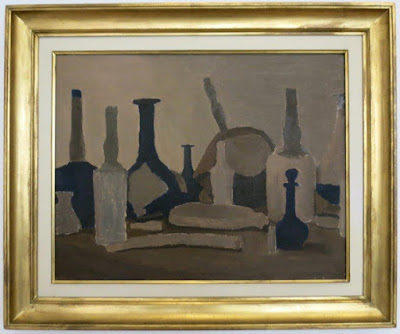 In the Other Rooms: Earlier and Later Work

At the opposite end of the hallway from the large main room is a small space dominated by a copper vessel on a pedestal, one of the rare objects that wasn’t painted or covered. Nearby was a beautifully chromatic painting in which the vessel figures prominently. This room holds a selection of paintings from the Teens, Fifties, and Sixties, a lovely rounding out of Morandi's oeuvre, and an opportunity to see how much changed (or didn't) over the years. 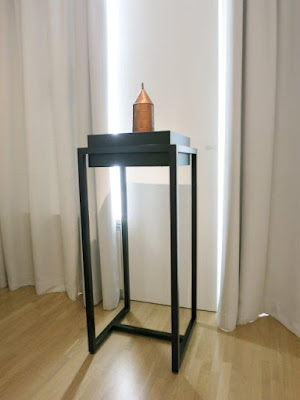 Above and below: A copper vessel that Morandi has specially made for his still lifes 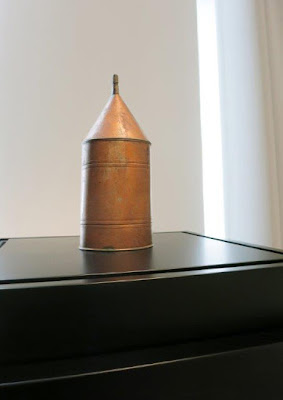 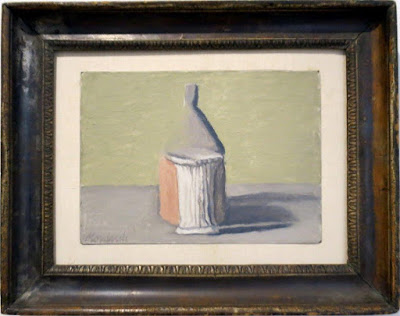 Still Life from 1963, with that copper vessel. This painting features a lovely washy brush stroke and a surprisingly chromatic palette 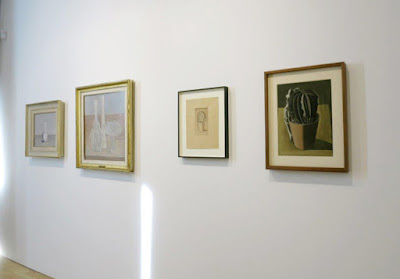 A wall of paintings from different decades, two of which are shown below 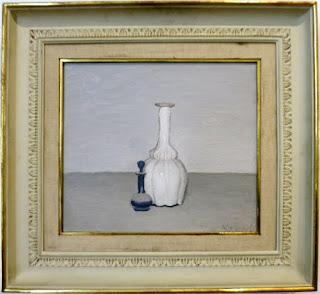 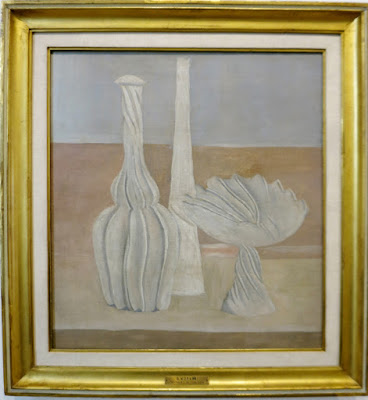 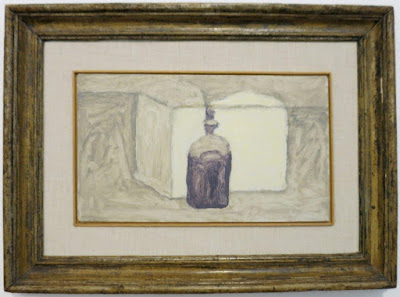 My favorite painting in the show, also from 1963: a single, almost purplish vessel set against forms that appear architectural. The oil was brushed on in a wash so light it looked like watercolor


The Center for Italian Modern Art (CIMA) is located at 421 Broome Street. Its mission is to examine and exhibit the work of Italian modern artists—Giorgio Morandi is its third annual exhibition—and to foster scholarship through a fellowship program. The guided tours are led by these fellows. CIMA is open to visitors by appointment on Fridays and Saturdays. To see Giorgio Morandi you must reserve a place. The exhibition runs through June 25, 2016.