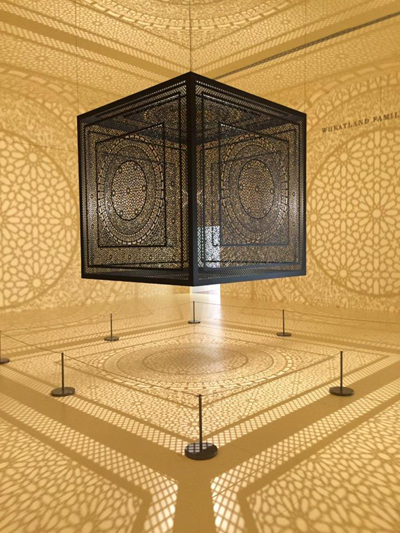 
I'm spending the entire summer in Massachusetts, so as I have done from time to time in previous years, I'm reviving Critical Mass., my reportage of art in the Bay State. In this first installment we visit the Peabody Essex Museum in Salem, a gem of an institution in a waterfront city otherwise known for its 17th Century witch history.

The PEM owns a beautiful collection of pan-Asian objects, the legacy of a time when the museum was the East India Marine Society. Eighteenth-century ship captains returning from their travels to China, India and beyond brought back wondrous objects. The collection has long since expanded to hold art and objects from around the world, and its curators mount compelling historic and contemporary exhibitions.

The spare and elegant Intersections, an installation by Anila Quayyum Agha, is such an exhibition.  A laser-cut steel cube, suspended in the center of a large gallery and illuminated by a single light bulb, casts patterned shadows into the space. The patterns are Islamic, drawn from the artist's recollection of mosque mosaics in her native Pakistan. You do not have to be Muslim, or religious in any way, to feel moved by the quiet and enveloping beauty of these patterns.

Here's the artist statement about her work: "In a contextual milieu where difference and divergence dominate most conversations about the intersection of civilization, this piece explores the presence of harmonies that do not ignore the shadows, ambiguities, and dark spaces between them, but rather explore them in novel and unexpected ways." 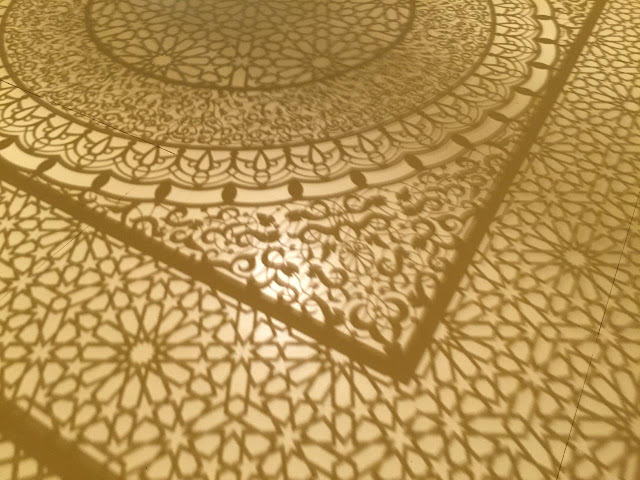 Above: the shadow-patterned floor
Below: a panorama of the gallery. Click to enlarge

Agha's  Intersections is up through October 16. If you go, make time to see   Rodin: Transforming Sculpure , which is up through September 5. In fact, just plan to spend the day. Visit the collections. And if you're an architecture person, be sure to see the Yin Yu Tang House , a late Qing Dynasty merchant's home, transported and rebuilt tile by beam within the museum; three historic homes--from the 17th, 18th, and 19th centuries, the latter a mansion, on the museum's campus; and Patrick Dougherty's Stickwork  sculptures on the grounds of the historic homes .  The gift shop is pretty nice, too.