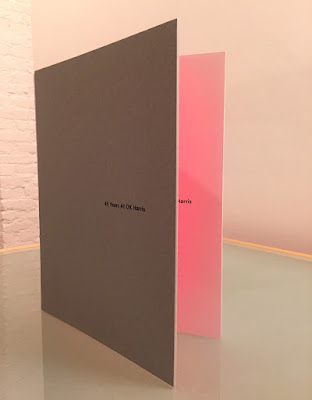 Art history in a bound volume,  45 Years at OK Harris
(Red endpapers cast a roseate glow on the title page)


I haven’t been posting much lately. Aside from recovering from knee surgery and the effects of pain medication, I wanted the previous post, The Onward of Art, to be visible during the two-month run of the exhibition. One of the things I love about that exhibition, which will come down in a couple of days, is the historical component. Paintings from some early members of American Abstract Artists—Alice Trumbull Mason, Esphyr Slobodkina, Harry Holtzman, Charmion von Wiegand, Ad Rienhardt, and Piet Mondrian—are on view, as well as the work of the group‘s contemporary artists. The current members are part of art history, too.

Indeed, artists at mid and late career have a personal relationship with art history. Without quite realizing it, we have become part of it. I’m not suggesting that we’ll all be included in Janson’s or have our work in the MoMA or Whitney collections, but in fact we are and have been part of the vast, interrelated conversation about contemporary art.

A recent limited-edition publication, 45 Years at OK Harris, underscores this idea. Produced and published by artist Ron Weis and Randem Press, with essays by sculptor Marilynn Karp and gallery manager Suzanne Kreps, it documents the gallery’s last event. Weis calls it " a unique visual record of the exhibition history of the gallery." (Disclaimer: I exhibited several times with the gallery.)

Here’s Marilynn Karp (who was married to the legendary founder of the gallery, Ivan Karp) from her essay in the book:
“Ivan died during the summer of 2012. He had ordained a few things when the gallery closed. . . He said that there should be a celebration of 45 grand years of OK Harris. Artists and collectors of their works and our staff were foundational to the greatness of OK Harris and the reason for the grandness of those years. We were all together on Saturday, 19 April 2014 to eat and drink to OK Harris, honoring the first gallery on West Broadway and virtually its last." 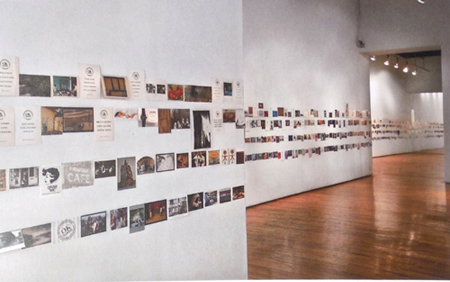 Above and below:
The block-long wall at OK Harris that became a book
Photos: John Halpern 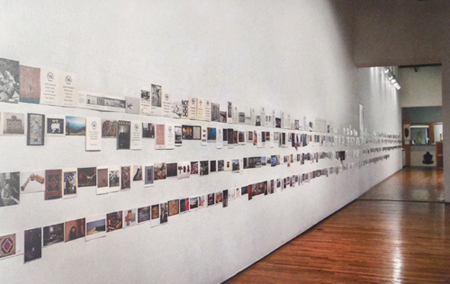 Running along the north wall from West Broadway almost all the way through to Wooster Street were four long rows of exhibition postcards. Mounted cheek by jowl, they represented almost every exhibition the gallery had mounted in those 45 years —four or five exhibitions at a time, seven or eight times a year—for a final farewell. Kreps had been the archivist of the postcards during her long tenure with the gallery, having inherited the collection from previous holders of the job. When the gallery closed, one full set went to the Smithsonian’s Archives of American Art and another to the New-York Historical Society. An almost-full set was put up on the wall for all to see. For much of the evening, guests perused the wall, looking for their own postcards and pointing out those of shows they remembered. Stories were shared.

"The project had a spontaneity about it from beginning to end," says Weis. "I asked Marilynn if I could come into the gallery with a photographer to record the visual record. It was the Saturday night of the party. She said I could come in on Tuesday." He returned with photographer John Halpern, who shot the wall in sections with a hand-held camera. "There was no time to set up lights. We had twenty minutes and then then it was going to come down," says Weis.

The volume has a spontaneous feel, too. Beautifully printed on glossy paper, it features a gray bookboard cover--the material that usually gets covered with fabric or paper--and a visible binding. Red endpapers offer a visual jolt. Weis worked with Randem Press publisher Abby Kinsley to get the volume's unique look and feel.Want to know who showed there? The last third of the book includes scanned images of the year-by-year exhibition schedule, with every single artist for every year from 1969 to 2014. This was Weis's idea, a way to make sure that those artists whose postcards were not included were represented in the gallery's history.

Artists, famous and not-so shared the wall and appear in the book, a reminder that recorded art history is rarely as generous as the inclusive vision Ivan Karp had for his gallery. But what a conversation he engendered! 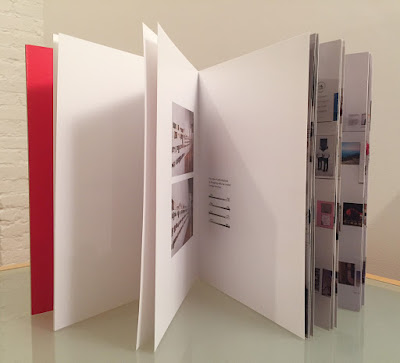 A peek into the volume, above, and one of the spreads 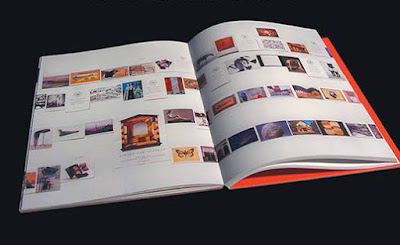 A limited number of 45 Years at OK Harris are available from Fresh Art. The cost is a rather steep $250, but proceeds are being donated to the organization, which is dedicated to  promoting art as a tool for personal transformation. You can also purchase by check, made out to Fresh Art, from Fresh Art, P.O. Box 1102, New York, NY 10276.

Put it next to your Janson's.
Source : joannemattera[dot]blogspot[dot]com
post from sitemap
Susan Hiller at MOT International
In the Pink